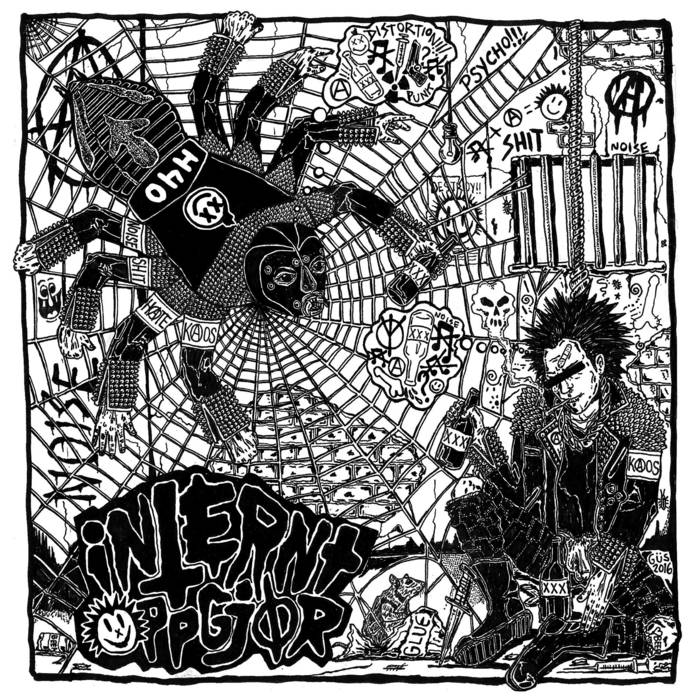 Quoted from Jimmy's Channel:
"I was already familiar with Internt Oppgjør's tracks since I was sent them months back, but it still manages to hit me like a speeding truck. The way the first track opens with a boisterous cackle before degenerating to the same sloppy hardcore found in their demo is the coolest shit, I can't get over it. In fact, all three of their tracks pretty much nail it. While adhering to the same brand of mutie-hardcore as per usual, the group seems to be playing off of vocal harmonies more through the usage of a second vocalist, which unfortunately sometimes gets lost in the sea of reverb and slapdash riffage. I wouldn't consider that a fault though, it's just a true testament to how vile and incessant their music can get. Internt Oppgjør absolutely kills it, but that doesn't come as a surprise to me in the slightest. I loved their demo and expected nothing but the most top-tier grimy shit from those Norwegian squatters. Discunt is another story though; like I said, I had never heard their material until recently. From the name alone, I anticipated powerviolence or one of those grind-whatever bands, but it turns out that they're actually somewhat of a stark contrast from that. Discunt is surprisingly melodious when compared to Internt Oppgjør's incessancy, and makes me wonder where the hell this band has been all this time. They're really good! Boasting a male lead backed by one or two female vocalists, this four-piece fires on all cylinders to deliver mostly bass-driven rhythms that have a surprising amount of groove to it, while still retaining enough of a hardcore intensity to allow it to co-exist with Internt Oppgjør's impetuosity on the same wheel of wax. For a hardcore group, they've got some solid toe-tappers, that's for sure. If Internt Oppgjør isn't quite to your liking, I'd suggest that you at least give Discunt a try. They're a wonderful counterpart to this split that's well-worth a listen.

All in all, this 7" was such an unpleasant surprise, but I mean that in the best way possible. While I had the highest expectations for Internt Oppgjør, I set my sights low for Discunt, and both still managed to blow me away. This 7" will be up for sale sometime soon, likely through their distro, "Byllepest". I'm not totally sure on that though, so I'll be sure to update the description once I get confirmation on that."

Hardcore punk label, distro and bookings in scandinavia and europe. get in touch for wholesale and trades!

Bandcamp Daily  your guide to the world of Bandcamp

Guests include Kassa Overall and Muriel Grossman, plus an LP of the week by Van Hunt.